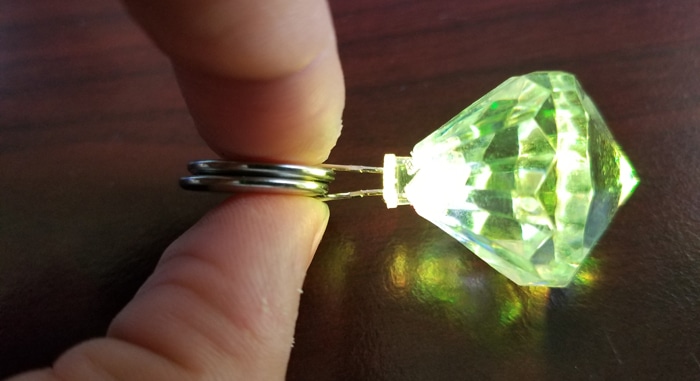 The idea of adorning oneself with glowing bits has been around forever, but instead of smearing ourselves with phosphorescent jellyfish or placing fireflies in ears like some uncivilized cavemen we went for simple LED earrings. We made a build that involves a simple slow-scroll RGB LED and a few reflective bits to bounce that pretty light around for a shiny ear decoration. It is powered by a lightweight coin cell battery integrated into the design eliminating the need for wires. In order to conceal it, we used this brilliant idea by Idunn Goddess to utilize plastic googly eyes that can be found at any dollar store. The benefit of this method is that the battery can be removed and/or replaced once it is worn out or you want a break from being shiny allowing for more than one-time use.

Cut an opening that will fit your chosen battery’s diameter and take out the circular bit that was pretending to be a pupil or an iris. You won’t need that fake, lying piece of plastic ever again.

Poke 2 holes for LED legs with the LED legs on the opposite side of the battery slot. They eventually will become one hole, but that is not important.

Poke a hole in the googly eye backing next to the battery opening and thread the earring hook through.

Embellish and/or paint the front of the googly eye to conceal the battery. We glued some flatback rhinestones for added shine. No one needs to see the inner workings of this earring – it should glow by magic only.

Drill the hole of the right diameter to fit the LED dome in the plastic crystal and glue the LED into the diffuser. In the above photo, the opening for the LED wasn’t deep enough. We were lazy. But that doesn’t prevent the light from bouncing around the chandelier nicely, as you will see in a bit.

Insert the battery and the LED as shown. If the polarity is correct, your LED will light up. You can carefully glue the base of the LED to the battery container. Or you can do it recklessly and then you will have an ocean of crazy glue solidify over the battery making it impossible to replace.

As an option, you can sandwich two coin cells for added brightness and longevity. They still fit into the holder just fine.

Tip:
If you are not fond of fishing a slippery coin cell out of the holder every time you want the LED off, you can cut out a small plastic tab to place between the LED leg and the battery. This will create a break in the circuit and preserve battery life. Talk about energy saving.