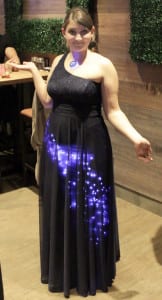 I have a daughter. A daughter who likes pretty things, and like most daughters, likes to stand out once in a while. As the President of a local technology-hacking company, and having been involved with more than a handful of technology dresses & costumes in the Calgary area, she thought it would be a good idea if we worked together building a High-School graduation dress, with some techno-bling.

This isn’t the first time we’ve worked on something together like this. It’s our 3rd time around, learning more each time. In short, the dresses have been:

This project is a Salvation-Army purple rescue dress for a MakeFashion mixer event, where we sewed in a prewired LED string with battery pack to the dress lining. Simple, quick, and effective.

Another Salvation-Army rescue dress, this time being a strapless number for an awards banquet.

Materials used in this bundle:

We sewed sleeves made from quilt batting to the backside of the fabric, in front of the crinoline lining. We also upped our game by using 30-LED/meter addressable RGB LEDs, with an Arduino Pro Mini for some skirt-color changing. Construction was easy: 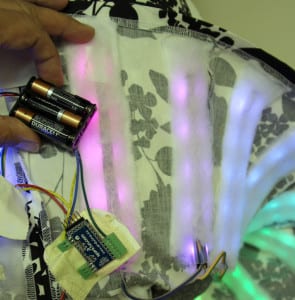 The latest and greatest, a proper store-bought and fitted blue 1-shoulder gown, with accenting laser-cut pendant with addressable twinkle effects.

The “Starry Night” dress parts in this bundle:

As this dress was a more serious investment than the other two, we planned out our electronics a bit more seriously. Our best decision was to invest in a “technology undergarment”, otherwise known as a “slip”. Apparently, they’re a common accessory in women’s fashions, but they also make a great technology layer. 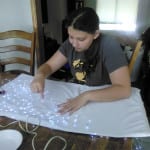 This technology layer is something that Angela Dale has been harping to me about for ages, as she’s worked on some pretty serious wearable technology costumes and dresses. She came into our offices a few years ago when she was needing to add lighting to stage costumes for the Calgary Stampede “Young Canadians” Stage production, and we’ve since collaborated on several projects. We’ve learned lots from each other. The point is, build your technology so it can be isolated from the fashion aspect as much as possible. It makes building and maintenance of both the fashion and technology aspects much simpler. 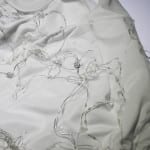 We picked up a reasonably good quality slip here in town, and fit it to my daughter’s size, adding pouches for batteries and controller technology. Our plan was to create a “star field” effect on the whole slip with our new Superflex string LEDs, then intersperse “twinkle” stars using individual WS2812B addressable LEDs. The slip features a slit on one side, which worked well with our diagonal starfield orientation. Anchoring buttons were added to lock the technology layer to the dress.

We laid a set of warm-white Superflex LEDs down on one face of the slip, and tacked it into place with hot glue. Testing the visuals under the dress gave us the idea to echo the off-the-shoulder flow with a flowing “milky way” starfield. The 3.7V LiPoly cells generated enough light that we didn’t need to power the strings up to a full 5V. Subtlety was more important that bling in this design. Sitting tests on the LEDs strings showed they were quite robust, and they’ve easily handled two events without any wiring failures. 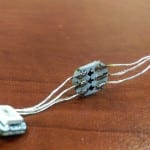 After mirroring the starfield on both sides of the slip, we glued the 12 addressable LEDs into place and cut strands of raw Superflex wire to link them into two 6-element chains. Two chains just in case if there was a failure in one of them, the total effect wouldn’t be lost. This Superflex wire is something fabulous – 8 strands of enameled wire wrapped around a nylon core to form the equivalent of 26AWG wire, capable of carrying ~2A without the fatigue failure like it’s solid-core cousin. We would triple up the distance between LEDs, use a soldering iron to melt through the nylon and enamel, and presolder the wire at the fold point, then snip it apart (leaving 2 pretinned wire tips). After a little practice, it was trivial to wire up the Pwr/Gnd/Signal lines between all the addressable LEDs. 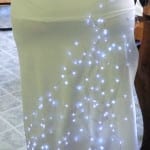 We did run into some issues with burning out the initial WS2812B on each string. Input-impedance matching on the first LED from the microcontroller is proving to be quite necessary, as we were overdriving the signal to this first LED and making it go *poof*. We finally found a 560 ohm resistor from the Pro Mini to the first LED element stopped the killing issue. We had to replace six addressable LEDs. 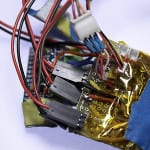 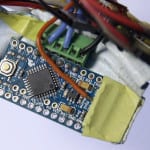 The power draw on the system measured to be 460mA @ 4.1VDC (Lipoly full charge). The pair of 2000mAh BattR15 are wired in parallel to give us a solid 6 hours of action from the dress.

Electronics were split between the microcontroller and a wiring breakout board. The Arduino Pro Mini was outfit with our 0.1″ spaced terminal strip connectors for easy debugging and possible future upgrading (accelerometers!).  Unique connectors were used for addressable LEDs, power, and Superflex LED strings.

To accent the off-the-shoulder design, we decided a suitable pendant was necessary, which was fabricated by Solarbotics tech Dan Damron. Modeled around a 16-element Adafruit NeoPixel ring, we added accenting acrylic backing, a SeeedStudios Xadow controller and 400mAh LiPoly battery.

To offer maximum flexibility, we assembled the battery and microcontroller as a tidy rear-hanging pendant, with doubled-up Superflex wire forming the necklace chain. This allowed the wearer to flip the pendant so it either was dazzling (LEDs facing forward), or subtle (reflecting off the skin). The code used the same “snow-sparkle” code as the dress, continuing the effect.

We ran power, signal, and two ground lines out from the technology package that hangs down the inside of the back of the dress. We considered channeling the wire down the back straps, but it was really not intrusive being tucked under the strap into the small of the back.

We were drawing a minuscule 40mA, so we figured we had a very safe 6  hour battery life out of the battery.

It is becoming easier to add technology to fashion, and these 3 dresses show that a simple lighting effect isn’t difficult. Future iterations will feature motion and proximity responses.

Find a garment with a translucent quality, and start planning out your own technofashion. You’ll find your soldering iron and sewing machine can belong on the same tool bench.